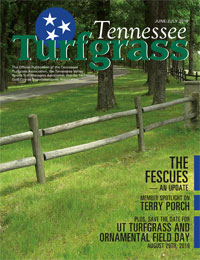 This issue features an update on fescues as well as member spotlight on Terry Porch. Also includes a roundup on glyphosate and more!

From the TTA President
News from TTA
Calendar of Events

The Fescues: An Update

There are more than one-hundred species of fescues worldwide. Some are annuals while others are perennials…
Read More »

A Roundup on Glyphosate:
History, Use, Issues, and Alternatives

Glyphosate has been in the news quite a bit recently. You probably have seen the ads on television concerning glyphosate and human health…
Read More »

I had the privilege of participating in National Golf Day which includes golf awareness events. This event is hosted by We Are Golf, a coalition of the game’s leading associations, including GCSAA…
Read More »