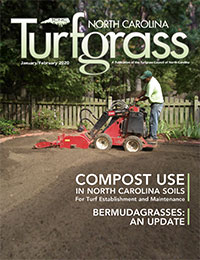 This issue covers compost use in NC soils. Also features an update on bermudagrasses as well as a feature on TifTuf at "The Swamp."

Compost Use in North Carolina Soils
For Turf Establishment and Maintenance

Compost provides many benefits to the soil, the plants, the environment and to the pocketbook of the end user. It is readily available in most parts of North Carolina and its use should be considered for all of your projects.
Read More »

By Tom Samples and John Sorochan | University of Tennessee, Department of Plant Sciences

Bermudagrass, an aggressive sod-forming and warm-season turfgrass, most likely originated in Africa and south and southeastern Asia.
Read More »

TifTuf at the Swamp: Laying the Foundation for Excellence

Upon learning of other features of TifTuf — staying green later in the season than other Bermuda grasses, excellent wear tolerance, increased drought tolerance — Smith was certain he’d found the right fit.
Read More »